As genealogists, we often share our journey on a particular family discovery through a series of posts over a period of time. These posts appear on our blogs in reverse chronological order making it difficult for a new reader to find the first post in the series and follow our progression through the research problem. We can group the posts with tags or categories, but still, on the tag or category archive page the posts still appear with the newest one first and the oldest one last, forcing our readers to scroll to the end to begin at the beginning.

This was the challenge I had with my ‘Brickwall Browns’ series which I began almost a year ago and go back to whenever inspiration strikes. I played around with various methods to link the posts together. I tried creating a page with a series of links. I tried linking each post with a prior and next link. Nothing really worked the way I wanted it to. Then I discovered the Organize Series plugin written by Darren Ethier that is available as a free download in the WordPress Plugin Repository. Suddenly, I was able to do exactly what I wanted to do. The plugin does this by creating a new post taxonomy – (standard post taxonomies in WordPress are posts and pages).

The Organize Series WordPress Plugin helps with the organization and presentation of articles/posts you write as part of a series. It helps make it easier for readers of your blog to discover all the series you’ve written and also to easily find post that are part of the same series.WP Plugin Organize Series

How to Setup a Series

Install the plugin from your WordPress dashboard (Plugins -> Add New) and activate it. Next, in your Posts sub-menu, you will find a new option to ‘Manage Series’.

Add your series in the same way that you would create a new category. 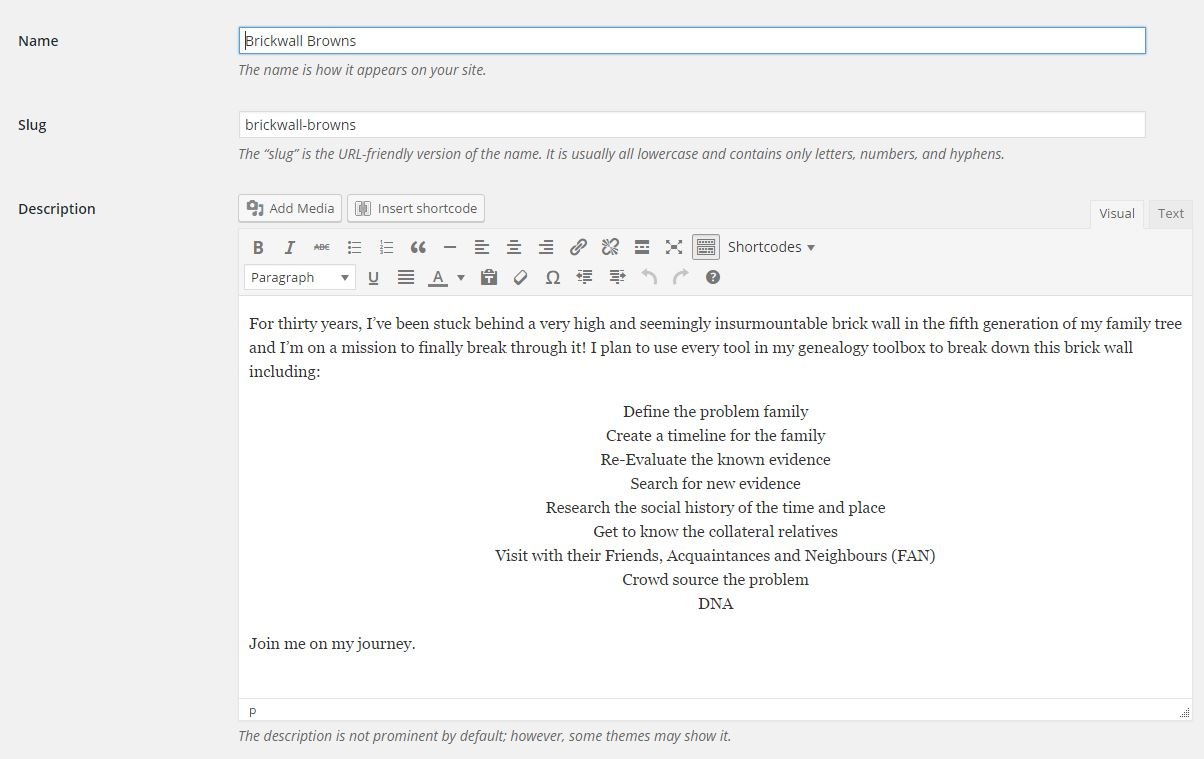 Add Posts to the Series

Next, go to your all posts listing page and filter your list to find all the posts that are part of a series. In my case, all of my Brickwall Brown posts were tagged with a category of the same name. There is no need to do a full edit of the post. The series option is available in the quick edit option. Simply select the new series you just created and enter a number relative to the sequence of the post in the ‘Part’ field. If you do not enter a number, the plug assumes that this will be the ‘next’ post in the series. Also, if you suddenly realise that you missed a post in the middle, no need to panic. Just assign it the appropriate number and all the parts after that will automatically adjust themselves. Great feature this!

Link to the Series Page

Finding the link to the series page was not intuitive. I finally found it in my Yoast SEO settings for the Snippet preview. The URL will be: http://yourwebsite.com/series/series-name. You can add this URL to a menu or a widget.

You will find the settings for the Series plugin in your settings menu under Series Options. The options include:

The settings page also gives options for customizing the CSS for the series to change the format of the various displays. I will probably revisit this and add some customization since. although the ‘light’ option is not horrible, it also doesn’t fit really well with the rest of my theme.

From the options page, you can also enter an API key to enable some of the paid options for this plugin. These can be found on the author’s webpage and include:

Currently, I’m not seeing an immediate use for any of the paid options but that may change as I use the free version more. But for now I’m just happy to have finally found a solution to my series of posts challenge.

Finally, I can display a series of posts together in chronological order so I can take my readers through my progress from beginning to end. The Organize Series plugin is a little difficult to figure out at first but is absolutely brilliant once you get it set up! The default CSS options are ok, but to totally rock this one out of the park, you are going to want to create some custom CSS.

Added to wishlistRemoved from wishlist 1

We love comments! Please let us know what you think.

This site uses Akismet to reduce spam. Learn how your comment data is processed.